On your dinner plate and in your body: the most dangerous pesticide you’ve never heard of

A child’s risk of brain damage increases if its mother had been exposed to the pesticide by living nearby sprayed fields, a recent study in California finds​.
Louise Voller
Journalist

Supported by Journalism Fund in collaboration with Investigative Reporting Denmark

Share on facebook
Share on twitter
Share on linkedin
Share on email
17. June 2019
Scientists say there is no acceptable dose to avoid brain damage. Its use is banned in several European countries. Yet its residues are found in fruit baskets, on dinner plates, and in human urine samples from all over Europe. Now producers are pushing for a renewed EU-approval – perhaps in vain.

The name is chlorpyrifos. Here is why the chemical and its risks are almost unknown to the public.

Thomas Backhaus, professor for ecotoxicology and environmental science at the University of Gothenburg, says that the substance took a long time to be recognised as one of the ”nasty” ones.

”In comparison with glyphosate, the active substance in Roundup, chlorpyrifos has been flying under the radar. When we talk of herbicides like glyphosate that kill weed humans can cope because we don’t have chlorophyll and don’t get directly affected. When we talk about insecticides, you have the problem that they affect all developing animals, including humans,” he says.

Thomas Backhaus’ concerns are well known in academic circles and shared by other researchers. Philippe Grandjean, professor in environmental medicine at the University of Southern Denmark and Harvard School of Public Health in the USA, notes that brain damages connected to chlorpyrifos have been found at the lowest detectable dose.

”That means by definition that you can’t define a dose tolerable for consumption – that dose must be zero,” he says.

The poisonous effect of chlorpyrifos on insects is not disputed. The unresolved question is to what extent the usage of chlorpyrifos is dangerous to all living organisms like fish in nearby waters or farm workers in the fields, or to anybody eating the treated products.

Tests of food samples in all EU-countries in 2016 show chlorpyrifos and chlorpyrifos-methyl in 5,5 percent of the 76,200 samples, as recorded by EU-institution EFSA (European Food Safety Agency). If we look only on randomly sampled unprocessed plant based food products in EU, the percentage is 6,2 according to Pesticide Action Network Europe.

In the samples recorded by EFSA 374 contained chlorpyrifos or chlorpyrifos-methyl above the Maixmal Residue Limit (MRL).

However environmental scientists believe residue levels for chlorpyrifos should be zero.

In 2013 Swedish researchers reported findings of chlorpyrifos and other pesticides in urine from middle-aged women, a group with a high intake of fruits and vegetables. Chlorpyrifos has never been registered for agricultural use in Sweden. In countries where the use of chlorpyrifos is banned the pesticide never the less reaches consumers through the free movement of goods on the internal market.

In 2016 studies for the Danish Ministry of Environment found chlorpyrifos in the urine from nine out of ten children and their mothers. The researchers suggested a possible connection between chlorpyrifos and development of ADHD (Attention Deficit Hyperactivity Disorder).

In Wallonia, the French speaking part of Belgium, the Public Service Scientific Institutein 2018 found residues of chlorpyrifos in 100 percent of urine samples from 258 schoolchildren aged 9-12.

A recent study in California connect autism and early brain damage in children with prenatal and infant exposure of chlorpyrifos. A child’s risk of brain damage increases if its mother had been exposed to the pesticide by living nearby sprayed fields, the study found.

The Californian study published in March 2019 has triggered a ban of chlorpyrifos in the US’ largest agricultural state. Five other US-states; Hawaii, Oregon, New York, Connecticut and New Jersey have announced or decided similar bans.

On a federal level a ban on chlorpyrifos has been blocked by the Trump administration since 2017. In April 2019 a court ordered the U.S. Environmental Protection Agency to decide by mid-July if it will permanently ban the chemical.

The producers’ role is obvious and well known to the scientific community. The present EU-assessment of chlorpyrifos is to a large extent based on hundreds of studies financed and submitted by Dow 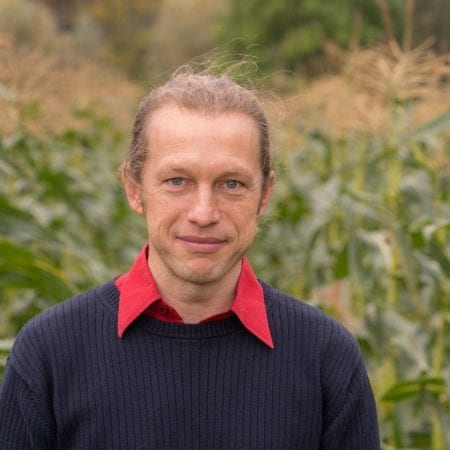 In Europe the scientific debate over chlorpyrifos is hardly known outside expert circles and the decision process about allowing or banning pesticides is difficult to track and to follow.

EU countries follow common decisions on whether to approve a substance like chlorpyrifos or not. Chlorpyrifos has been approved on an EU-level since 2006 while decisions to allow products with the active substance, and the use of them, are up to the member states.

As goods within the EU are supposed to move freely across national borders treated food gets spread around. That’s why consumers might find vegetables and fruit treated with chlorpyrifos in their grocery stores even if such treatment has never been allowed in the country.

A pan-European alert system has been set up for national authorities to notify other authorities on findings of hazardous food. These alerts often come after suspicious products have been sold – and consumed.

How companies have a say

Evaluation of possible health and environmental hazards are primarily based on studies paid for by the producers. In the case of chlorpyrifos the main producer has been Dow Chemicals, now Corteva Agriscience, the agricultural division of DowDuPont. Corteva Agriscience turned into a standalone company 1 June 2019.

”The producers’ role is obvious and well known to the scientific community. The present EU-assessment of chlorpyrifos is to a large extent based on hundreds of studies financed and submitted by Dow,” says Axel Mie, associate professor at Karolinska Institute, Department of Clinical Science and Education Stockholm.

With colleagues Christina Rudén and Philippe Grandjean, Axel Mie has initiated a scientific debate. The three environmental scientists claim that data from Dow Chemicals’ own research back in 2000 actually showed that chlorpyrifos has an impact of the development of cerebellum (”little brain”) in rats. These findings had however not been recorded in the conclusions filed to the EU-authorities.

Scientists behind the criticised studies reject these claims. They argue the loss of brain weight in rats can be explained by the brains’ fixation in formaldehyde before being measured, and that no pesticide control product has been more thoroughly evaluated.

In the debate published by scientific journal Environmental Health, where Philippe Grandjean is one of the editors-in-chief, the defenders of chlorpyrifos first stated they had no competing interests. In a correction posted in May 2019, they declared that at the time of their submission to the journal, they were employed by Dow Chemicals, the primary registrant and manufacturer of chlorpyrifos.

”More than five decades of experience”

We have asked Corteva Agriscience for comments on the allegations above specified in the following questions:

From its headquarters in Johnston, Illinois, USA, Corteva Agriscience chose to answer with two statements in writing:

”Chlorpyrifos is one of the most widely studied crop protection products in the world and is currently registered in roughly 100 countries, including the U.S., all major U.S. trading partners and in the EU. Policy should be driven by sound science and data and follow a predictable and transparent regulatory review process.

Labelled uses of chlorpyrifos rest on five decades of experience in use, health surveillance of manufacturing workers and applicators, and more than 4,000 studies and reports examining the product in terms of health, safety and the environment.”

Not for us to know

Yet that is not necessarily the case.

Market analysts project that the sale of chlorpyrifos will see signifcant growth in the next five years, according to Persistance Market Research which will release a new report in August.

Experts from EU-member countries Spain and Poland have since May 2017 prepared a reassessment of chlorpyrifos and related chlorpyrifos-methyl for a possible new acceptance in the autumn before the present approval ends.

There are five companies producing chlorpyrifos registered in Spain including Dow, now Corteva. One of the five is FMC Corporation which until 2016 manufactured chlorpyrifos at its plant Cheminova in Denmark where chlorpyrifos is not allowed to use.

The bulk of a draft reassessment report has been open for comments. It consists of some thousand pages filling close to 90 Megabit of data when downloaded from the homepage of EFSA (European Food Safety Agency). Not all of it is readable though. The proposed decision by Spain and Poland is not accessible, as shown below: 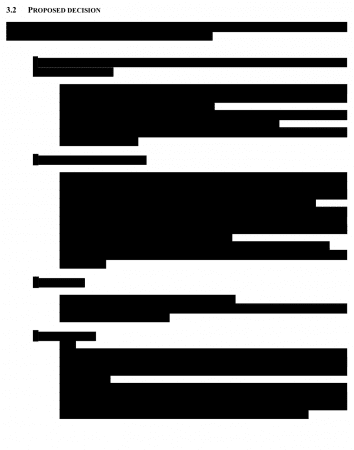 This black out of central information is done by EFSA which has the job of preparing the forthcoming EU decision.

But is EFSA legally justified in keeping this information under wraps? The Aarhus convention a pan-European UN-convention from 1998 has been binding EU-law since 2003. This law says information related to emissions to the environment must not be withheld on the ground of protecting commercial interests.

This was underlined by the EU court in Luxembourg in March 2019. The court said information concerning the herbicide glyphosate, known under the product name Roundup, could not be held back by EFSA.

With reference to the glyphosate-judgement we have asked EFSA to release the proposed decision on chlorpyrifos – answer pending at the time of writing.

On top of the known spread, the scientists’ warnings, the producers’ role, and the restricted public information there is one more aspect of chlorpyrifos to be unfolded; how the EU will decide either to ban or to approve the future for the disputed pesticide.

Followers of EU-politics will know the two legislative institutions are the Council, representing the member states, and the Parliament representing the peoples of Europe. This does not apply for approval of pesticides. Here the final decision will be taken by a committee of national experts on the suggestion of the European Commission, a non-elected body of civil servants.

The actual evaluation of chlorpyrifos will be done by the unit for pesticides and biocides, at the 6th levels from the top in the hierarchy.

”But, other directorate-general will also be consulted before the final decision, ” says an EU Commission spokesperson.

This committee can reject the Commission’s proposal if it’s members can form the necessary majority. Should that happen the Commissions can turn to an Appeal committee for a re-assessment.

At the time of writing it is known when meetings are scheduled for the relevant committee. The agenda for these meetings is not. We are not supposed to know who the participants in these meetings are. What suggestion they will be asked to consider is still officially unknown.

”The Commission won’t go forward with the renewal of the authorisation because the health concerns are very clear”.

Adding to this, the NGO PAN Europe said:

”We’ve heard in the corridor that chlorpyrifos doesn’t meet the approval criteria.”

The investigation divided into articles. You decide where to begin.

UN Rapporteur: “EU-countries ignore the rights of the child”

A pesticide known to cause brain damage in children and fetuses is up for re-approval in the EU. If EU-member states allow this to continue, it will be a breach of the UN Convention of the Rights of the Child, UN Special Rapporteur on toxic waste says.