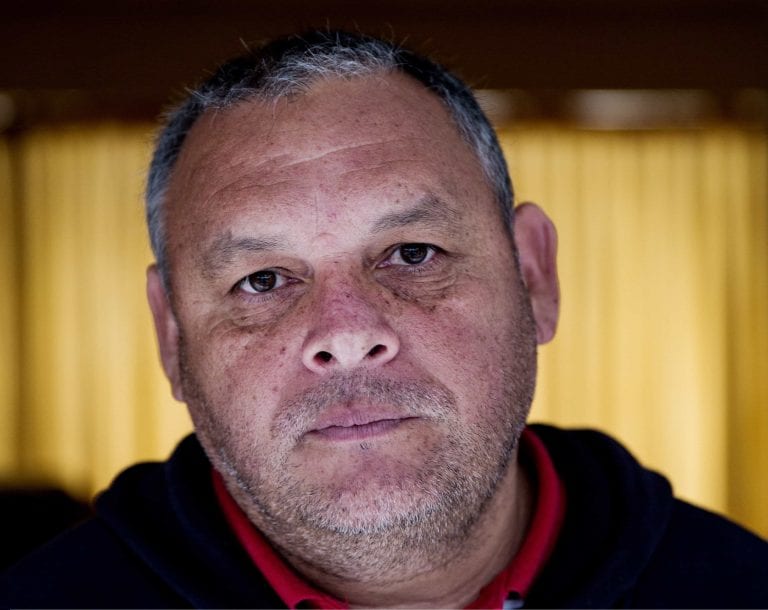 On Monday, March 20, Rodrigo Mundaca received an anonymous call on his mobile phone.

“The voice on the phone just said that I should keep my mouth shut and then asked, ‘What size are you? We have to find your traje de madera (wooden suit, ed.).’ In Spanish, that refers to a coffin,” explains Mundaca.

Mundaca is an activist that works with the organisation MODATIMA to promote water rights in Chile.  The water shortage in the Chilean province of Petorca has worsened in recent years, both because of drought and because of a massive increase in the water-intensive production of avocados.

Privatization of water rights and illegal pipes that carry water from rivers to private wells have dried up Petorca’s waterways to such an extent that local residents must receive water deliveries by truck, and avocado plantation owners have been assessed fines for violations of the water law.  This state of affairs was described by Danwatch in the investigation Avocados and stolen water, published the day before the anonymous phone call, in which Mundaca is quoted by name.

Mundaca is receiving assistance from Ingrid Wehr from the Heinrich Böll Foundation in Germany, which has partnered with MODATIMA for the last three years.

“Our office and lawyers in Chile say that this is the most serious threat against Rodrigo Mundaca’s life in years,” says Wehr, who has helped to secure legal representation and security consultants for Mundaca and MODATIMA in the wake of last week’s threat.

“We do not regret it”

Danwatch’s investigation was covered in the media in Denmark and abroad, and both Dansk Supermarked and Aldi have made statements saying they will no longer do business with plantations that have been convicted of water theft.  Chilean television reported that Danish supermarkets are planning to stop buying avocados that are produced under illegal conditions.

“In the days after publication, we were getting a lot of attention, and several trade organisations and plantation owners came out to criticise and attack us,” says Mundaca.

“They (the avocado industry, ed.) claim that my colleagues and I want to damage Chilean exports.  They say that we are irresponsible and that our actions will cost many Chileans their jobs.  They call us eco-terrorists, and allege that we are working against the best interests of the country.”

Mundaca has an earlier conviction for slander, based on his 2015 claims in the Chilean press that plantation owners had been convicted of water theft.  The plantation owners themselves insisted that they had merely been assessed administrative fines for water law infractions.

“We do not regret our participation in Danwatch’s investigation, and we will not retract our statements.  We have fought for Chileans’ right to water, and we will continue to do so. Sadly, we are accustomed to the fact that threats, assaults and defamation are the price of human rights work in Chile, where it is unfortunately commonplace for the powerful to escape responsibility,” declared Mundaca.

Pointless to file a police report

Mundaca has no real evidence of the threats, and has therefore not reported them to the police.

“They called my colleagues too, with the same threats.  We don’t know who is doing the calling, and we have no proof. We have an idea of who may be behind them, but we have no concrete evidence, and in our experience, the police do not investigate these cases.  In 2015, I was assaulted in the street in broad daylight, and the police have done nothing to investigate that case,” he says.

Poul Hauch Fenger, a specialist in criminal law and legal advisor to Danwatch, believes that the threats should be reported to the police, however.

“There can be no doubt that these are actual death threats.  I see lots of these cases.  Even if a more subtle word than ‘wooden suit’ had been used, I would construe it as a threat that should be reported to the police, who ought to take this case very seriously,” says Fenger.

“The person making the threat has a criminal purpose – that is, to use the threat to stop this case – and so there can be no doubt that there is a lot of money at stake here.  It is a huge industry, and you spare no expense when it is threatened.  So unless there are other controversial issues in his life, then in particular the timing would suggest that he has been threatened because of his involvement in Danwatch’s investigation.”

Thomas Bang, director of communications at Aldi Danmark, says that the supermarket “strongly objects to those kinds of methods.”

“We have no desire to do business with suppliers that are involved in illegal activities of any kind,” declares Bang.

Aldi told Danwatch earlier that it only obtains a very small fraction of its avocados from Chile, and that in the future it would avoid buying avocados from the plantations in question.

“A case like this shows that there is even more reason to shine a spotlight on production conditions.  It is always a question of balance.  It is not without risk to call attention to situations like these, but that does not make it any less important – both the work of Danwatch and the responsibility taken on by NGOs,” says Grand.  He goes on to explain the difficulty facing the supermarket chains.

“The dilemma for us is that leaving the area altogether would be the simplest solution.  But in this situation, if we pull the plug entirely, it affects other people’s livelihoods.  And now we see that some people’s personal safety is threatened.  So that is not the right solution.  It is a predicament, but we will continue the work and stay in the area, which means that conditions will have to be documented first.”

One of the avocado plantations in Chile, which is a part of Danwatchs’ investigation and have been fined for water code violations, is represented by lawyer Juan Pablo Cerda L:

“First of all, we completely condemn the threats received by Mr. Rodrigo Mundaca’s. We consider them absolutely unacceptable. Threats of any kind are illegal and we strongly believe that if there is a discussion, it must be resolved from a legal point of view”,  Juan Pablo Cerda L, writes in an email to Danwatch.

At the trade organisation for fresh fruit, ASOEX, chairman of the Board, Ronald Bown Fernández writes in an email to Danwatch​:​

​”​According to our association’s core values and principles, ASOEX acknowledges and respects the right of people to express their opinions publicly without interference or threat, as expressly stipulated in our national Constitution. Therefore, ASOEX utterly rejects all statement or action aimed at infringing the freedom of speech​”​.