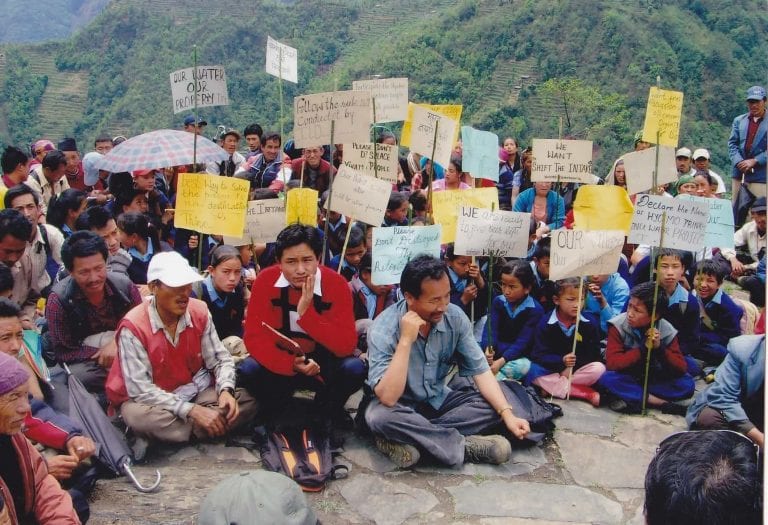 The paradox is easy to spot.  Running water is Nepal’s strongest asset at the moment, not only for investors in hydroelectric power plants, but also for communities that still lack electricity.  Nevertheless, a steady stream of disputes has arisen between local populations, the government, and an increasing number of hydro plants that are meant to create electrical currents out of water currents.

Take for example the Khimti Dhalkebar power plant in Nepal’s impassable mountains.  Khimti Dhalkebar will be able to provide up to 17 percent of the country’s electricity needs, but it is currently four years behind schedule because of a battle over power cables and the eviction of more than one thousand villagers.

Recently, violent conflicts and accusations of police brutality have flared up around the Khimti Dhaldkebar plant, which is now mired in a court case.

The Khimti Dhalkebar project is one of six cases of illegal land seizure before Nepal’s courts, while additional complaints have been filed with Nepal’s Human Rights Commission (NHRC), according to Tahal Thami, director of the Lawyer’s Association for Human Rights of Nepalese Indigenous Peoples (LAHURNIP).

“These conflicts arise because locals are rarely asked before the government has transferred their land to a company and they are removed.  Fundamentally, the biggest problem is that neither the government nor businesses consult local people as they are required to do by national and international human rights statutes,” says Thami.

According to Thami, Khimti is built particularly to sell electricity in India, which will not help to electrify Nepal, he says.

Nepal has no major fossil fuel reserves, and historically, the country’s per capita energy use has been very low, at about one-third of the Asian average and just one-fifth of the global average, according to Energypedia.

In 2008, the country experienced a serious energy crisis, worsened at one end of the country by severe drought that made hydro plants unusable, and at the other end by floods that ruined power cables transmitting electricity from India.  According to the World Bank, the energy crisis was of “unprecedented severity, caused by years of under-investment and sharp growth in electricity demand.”

In Kathmandu, Gyanu Maskey of the South Asia Institute of Advanced Studies researches the social effects of hydroelectric plants.  She is co-author of a report entitled Justice brokers, global indigenous rights and struggles over hydropower in Nepal.

She explains that the government enacted a plan in 2011 in response to the emergency. The Energy Crisis Management Action Plan suspends procedures meant to ensure indigenous peoples’ rights to consultation and compensation when their land is confiscated, making it easier to “use measures to compulsorily acquire land.”

The government had already implemented limits on compensation to local communities in connection with hydro power plants the previous year, but all the political plans came into force when authorities declared the state of emergency in 2011.

Maskey studied a hydroelectric plant project of this kind in Lamjung, where locals demanded compensation for damages connected to its construction, like cracks in their houses that were caused by the drilling of holes in the mountain wall for power lines.

Sixty-five-year old Farsi B. K. has been temporarily removed from his home in Tanglichwok in southern Nepal in order to make room for the hydroelectric project in Lamjung.  He is only 100 metres from his former home, but it makes a world of difference.  His new home is little more than a shack and not at all to the older man’s liking.

“I am sorry to have to leave my house.  I don’t know if it was force or fear that made me leave, but this is not in my best interest,” says Farsi B. K.

Maskey says that local people have also insisted on their proper share of the profits from the hydro plant, an amount that has been significantly reduced under the government’s energy plan.

“The residents wish to be compensated for damages to their property and to receive a share of the profits from the hydro plant.  This is in line with Nepalese law regarding hydro projects, in which the distribution of resources is prioritised over rights,” says Maskey.

But giving cash to individuals rather than securing collective rights makes it hard for groups that fight for the rights of indigenous peoples, Maskey points out.

“These are organisations like the Nepal Federation of Indigenous Nationalities (NEFIN), which speak out on behalf of indigenous peoples’ right to free, prior and informed consent before the confiscation of their land, according to the UN’s Declaration on the Rights of Indigenous Peoples and the ILO’s Indigenous and Tribal Peoples Convention (#169, ed.).”

Local communities, therefore, are not only struggling against the government’s suspension of applicable law, but also amongst themselves, as collective rights are pitted against the individual’s right to compensation for lost land or property.  But why should there be such resistance, when the 107 planned hydro projects can bring electricity to large swaths of Nepal that until now have been in darkness?

Rights of indigenous people under pressure

At an elaborate press conference in Kathmandu last April, the government launched yet another energy plan: the National Energy Crisis Reduction and Electricity Development Decade master plan.  The plan was meant to give new momentum to hydroelectric projects and bring more energy to Nepal by clearing certain “obstacles” out of the way, said Minister of Energy Top Bahadur Rayamajhi to the gathered mass of journalists.

“The government will initiate the process to speed up the construction of a few large hydropower projects that have been stalled due to various problems within a few weeks.”

Around the same time, the government sent a paramilitary group, the Armed Police Force (APF), to ensure progress in the construction of the Khimti Dhalkebar project’s power lines.  This led to violent conflict between demonstrators and the police that was described by activists who witnessed the clashes in an open letter to the World Bank in Washington.

On July 2 and 3, it happened again, with several local residents detained and arrested following a peaceful demonstration.

Specifically, the project will require that roughly one thousand people from several municipalities in the Sindhuli district be moved, while four thousand will be affected in all.  The power lines will run 75 kilometres through five rural districts in central Nepal.  Two hundred and eighteen towers, each 60 metres high, will be built at 700-metre intervals.  Because each tower requires a 30-metre radius around it, community members say that the land cannot be used for homes or agriculture.

Furthermore, the power lines will pass through several towns, hanging over four schools as well as several areas of historic, cultural and religious importance.  The value of the land will decrease, in part because of a loss of agricultural production.

The Khimti Dhalkebar Hydro Power project, which is partly owned by the Norwegian state hydro company Statkraft and partly financed by the World Bank and the Asian Development Bank, has been delayed for several years because of protests from local communities who say that they were not consulted in accordance with international guidelines and Nepalese law.