The full story (almost) in 48 seconds 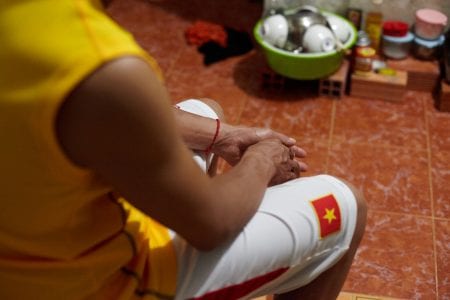 Vietnamese workers get chronical diseases from peeling shrimp for Danish supermarkets. Antibiotic residue has also been found in the shrimps, which poses a global threat

In collaboration with P1 Orientation

The full story (almost) in 48 seconds

37-year-old Ngoc Anh is working 83 hours a week on average, pealing shrimp at a Vietnamese shrimp factory. She has chronic sinusitis due to vapors from the chlorine at the factory and her body aches from dragging heavy boxes of shrimps that are sold to Danish consumers in supermarkets such as Rema 1000, Føtex and Netto.

Danwatch has been in Vietnam and interviewed researchers, doctors, health professionals and shrimp workers who paint a picture of a billion kroner industry with massive human costs.

Shrimp workers suffer from chronic sinusitis due to the hard assembly line work, they are sent home for days of fatigue and dehydration, and every month employees faint at the factories. These are the workers who help to secure Vietnam’s booming industry of tiger shrimps.

Danwatch has asked experts on working environment how they would assess the conditions of the Vietnamese shrimp workers:

“This should only occur under unusual circumstances, such as in disastrous situations, where you have to work long hours, and that is a horrible practice by employers”, says Jesper Nielsen, Head of the International Department at 3F.

Overuse of antibiotics on shrimp farms

Over the past twenty years, global demand for tiger shrimps has led to an intensified shrimp production in Vietnam and this has led to diseases in the dams. This is why antibiotics have been mass-fed to healthy as well as shrimp with diseases.

Therefore Danwatch asked The Danish Veterinary and Food Administration to test 13 different packs of frozen shrimps in their laboratory. All were shrimps bought in Danish supermarkets and produced in Vietnam.

The Danish Veterinary and Food Administration found antibiotic residues in 3 out of 13 packs – more specifically in Coop’s Kæmperejer, Planets Pride Vannamei Shrimp (sold in Meny) and Crown Seafood’s Ocean Delight (sold in Nemlig.com).
All samples were below The Danish Veterinary and Food Administration’s limit values, and the governing body therefore sees no need to follow up.

Still, every finding of antibiotic residues in food is problematic, says Hans Jørn Kolmos, professor, MD in Clinical Microbiology at The University of Southern Denmark.

“This could lead to increasing treatment difficulties. The more resistance, the more difficult the infections are to treat, the more people die from it. That’s the very elementary calculation”, he says.

Niels Frimodt-Møller, professor, MD in Clinical Microbiology at Rigshospitalet in Copenhagen, also estimates that overuse of antibiotics can have global consequences:

“Resistance is spreading in southern Europe, Africa and Asia and it is happening with a greater speed than new antibiotics is being produced. Especially in India, China and Africa there has been bad examples. This all boils down to not controlling the use of antibiotics, “says Niels Frimodt-Møller.

We love shrimps from Vietnam

Danish import of frozen tiger shrimps from Vietnam in 2017

We import most of tiger shrimps from Vietnam (2017)

The import of frozen tiger shrimps is growing

What is being presented here does not match our Code of Conduct, and we have already started a dialogue with our supplier to ask for an explanation.

Supermarkets will scrutinize the problems

Danwatch has presented the findings of poor working conditions and overuse of antibiotics to supermarkets and importers. They all say they did not know about the problems before Danwatch contacted them. This even though they all have control mechanisms in place to prevent it from taking place.

“What is being presented here does not match our Code of Conduct, and we have already started a dialogue with our supplier to ask for an explanation.”

“In collaboration with the producer, we will follow up on the conditions you refer to, regarding the social conditions of the companies you have visited. It is important to ensure that employees have organized working conditions that complies with applicable rules in the area”.